Slickguns was a popular marketplace for buying and selling guns. It was the best place for deals related to ammunitions. You can buy and sell any sort of guns through their platform.

What happened to Slickguns?

Back in 2017, They rebranded their website Slickguns into a new portal with the name of Gun.Deals. If you are an existing user of their website then you will not find a lot of difference between the new website and the old website.

You can still do all sorts of buying and selling on their new platform. This version has some added functionalities, it looks almost the same way it looked back in 2017 with a blend of a new design and user experience. 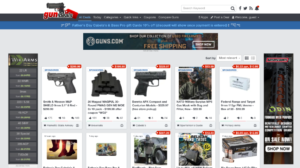 Don’t worry, If you don’t find your product listed on the Slickgun new website.

We have found some great alternatives to Slickguns as well, where you can find the best deals available related to guns and ammunition.

You can find out the best ammunition deals in the following ways:

We are the best blog available for guns and ammunition deals. We find out and sort the best gun deals from various portals and send it t our subscribers. So if you want to get the best deals landed in your inbox. Make sure, you’re subscribed to our email newsletter.

Reddit is also a great place to get various deals on guns. There is a popular active subreddit on Reddit /r/gundeals with over 195k subscribers.

It is similar to that of the gun.deals website ( the new website of Slickguns ). Users can submit their gun deals on the subreddit and users interested will get back to you. You will also get an option to upvote, downvote, and comment.

You won’t get all the functions of gun.deals, but it is a great place to get some quality deals on guns and ammunition.

Slickguns was a popular ammunition dealing portal where people can get the best deals and discounts on various guns and ammunition. Later they rebranded themselves as Gun.Deals

The new platform is also good. The only issue we found with the portal is that sometimes the deals listed on their website are not the actual deals. You will see a certain discount on the product but when you will checkout you will see a huge price as shipping fee and that’s how they trick their customers.

We will rate Gun.Deals 4 out of 5 stars.

Some of our popular articles: